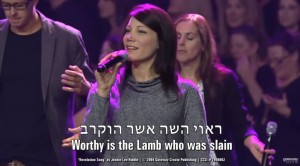 Looking at the Lord’s character nourishes us.  And as Jonathan Edwards used to put it, our God is great in His “conjunction of diverse excellencies!”  So songs that help us look at His multi-faceted attributes are a real treasure.  We will sing such a song this Sunday: “Digno y Santo” (“Revelation Song” in English).  You can hear our brothers and sisters from all over the world worshiping with this song by clicking on this picture a couple times.

Here’s some of my thought on what the song means…

The Spanish version begins with

It is a reference to Revelation 5:6.  Let’s just look at the context (although I really encourage you to read all 14 verses of the chapter).

In verse 2 of the song it says:

In English the words are “Clothed with rainbows of living color”

Verse 3 of the song has this line…

In English the words are “Jesus Your name is power”

Just how great and powerful is His name?

“And there is salvation in no one else, for there is no other name under heaven given among men by which we must be saved.” (Acts 4:12)

“Therefore God has highly exalted him and bestowed on him the name that is above every name, so that at the name of Jesus every knee should bow, in heaven and on earth and under the earth, and every tongue confess that Jesus Christ is Lord, to the glory of God the Father.” (Philippians 2:9-11)

The chorus starts with these words:

In biblical language, when someone wanted to emphasize something, they didn’t click a ‘bold’ button, instead they repeated a word.  So, for example, in Genesis 14:10 when the kings were fleeing from Abraham they fell in – according to the Hebrew – “pit pits” (e.g. really bad pits!).  Another example is when Christ emphasized something by saying “Truly, truly…”

What attribute of God is elevated to the level of repeating something not just 2 times but 3 times in both old and new testaments?  His holiness.  It means… set apart… an infinite “cut above”… other… even alien (in the pure sense of the word).

He is holy… in every way…

What an amazing God.  We look forward to worshiping Him with you on Sunday!