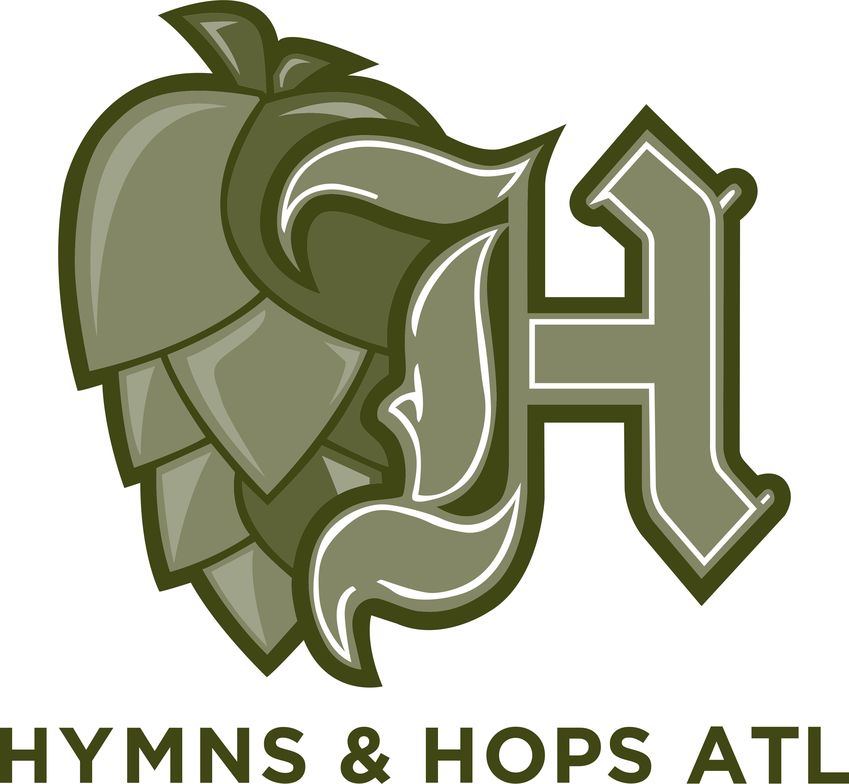 A food truck will be in the premises, the tap room will be open, and soft drinks, bottled waters, and juice boxes will be available. Also, feel free to come early for their Makers’ Artist Market (with 50 plus vendors)!
Hymns & Hops is family-friendly. It’s a simple concept. We gather in the community, sing hymns, and enjoy good food and drink. Hymns & Hops started in Greenville, SC, in December 2016. It has spread to six other cities around the country and is now in Atlanta!
ABOUT HYMNS & HOPS

With full hearts and pints, we invite you to join an unoriginal new tradition called Hymns and Hops. The idea is simple: sing the Good News and enjoy a good brew. For hundreds of years, saints of old would often gather at the local pub for drinks, conversation, and even song. Though lost for a while, this practice is making a grassroots comeback.

For hundreds of years, saints of old would often gather for a drink, conversation, and song. Though lost for a while, this practice is making a grassroots comeback. And lucky for us, this revival has found its way to Greenville, South Carolina.

It seems pretty simple on the surface: sing hymns, sip hops. And in one sense, yes, it is that simple. But in another way, it’s far more than meets the eye. Singing is one of the most repeated commands in all of Scripture. For example, Psalm 47 says, “Sing praises to God, sing praises! Sing praises to our King, sing praises! God is King of all the earth, sing praises with a psalm!” This might be the most straightforward verse in the Bible to understand: God is incredible, so sing.

Additionally, singing is one of the primary ways God wants his people to express and process their emotions. Singing is a way to show our unity and our hope in Jesus. And we don’t have space for it here, so you should Google it later, but singing (especially with other people!) has incredible health benefits. Singing, in the words of 20th-century pastor and theologian Dietrich Bonhoeffer, “will help dissolve your perplexities and purify your character, and in times of care and sorrow, will keep a fountain of joy alive in you.” You see? That’s far more than meets the eye, and Martin Luther agrees:

“Experience testifies that, after the Word of God, music alone deserves to be celebrated as mistress of the emotions of the human heart. For if you want to revive the sad, startle the jovial, encourage the despairing, humble the conceited, pacify the raving — and who is able to enumerate all of the lords of the human heart, I mean the emotions of the heart which incite a man to all virtues and vices? — what can you find that is more efficacious than music?”

So, by all means, let us sing. And may the fruit of our harmonies and melodies be a greater love for and delight in Jesus himself.

And then there are the hops. Here, and understandably so, some people pause. But Scripture repeatedly speaks of drink as a kind of gift that should be responsibly and happily received. It’s often seen as a gift of celebration, like when Jesus turns water into wine at the wedding in John 2 or when the psalmist writes that God has given drink “to gladden the hearts of men” in Psalm 104. And shockingly, Psalm 104 was likely originally sung! Hmmm? Hymns and hops together?!

Further, wine during harvest was a blessing in Genesis 27. David writes in Psalm 4 that the Lord has put more joy in his heart than when grain and wine abound. Paul encourages his friends in 1 Corinthians 10 that “whether you eat or drink, do all to the glory of God.” And the prophet Isaiah longingly looks forward to a day when the Messiah comes, a day when “the Lord will make for all peoples a feast with well-aged wine and rich food, and on that day he will swallow up death forever.”

It should go without saying that Hymns and Hops want to enjoy God’s gifts within the parameters of God’s Word. So, we believe it’s foolish and irresponsible for a follower of Jesus to abuse alcohol. God’s Word is clear: drunkenness is a sin. But, in the Bible, for those who wish to receive the gift of drinking responsibly, we’re invited by the author of Ecclesiastes to “eat, drink, and be merry.” And there’s a way to do this that turns our hearts toward God in joy and appreciation. Even when Jesus inaugurated the Lord’s Supper for his followers, he ate, drank, and gave thanks. So then, with Isaiah’s prophecy in mind, Jesus told his friends, “I will not drink of this fruit of the vine until that day when I drink it new with you in my Father’s kingdom.” That’s Matthew 26:29. And do you know what the next verse says? It says they sang a hymn together.

So, it seems that these two are quite a pair, to sing and to sip. It’s like they were designed to conspire for our joy. And we want to do this with enthusiasm and gratitude, humility and happiness, with one another and for another. Ultimately, we pray that you would be encouraged to trust and follow Jesus more passionately as we sing the good news and share a good brew. Peace be with you! And cheers!